Google has released a new plugin for publishers using WordPress. The official Google Publisher Plugin offers support for Google AdSense and Google Webmaster Tools, with more services likely to be added in the future.

This is a beta release, so as an early adopter, you’re also a test case. Google said in the release announcement, “We’re still fine-tuning the plugin to make sure it works well on the many WordPress sites out there. We’d love for you to try it now and share your feedback on how it works for your site.” 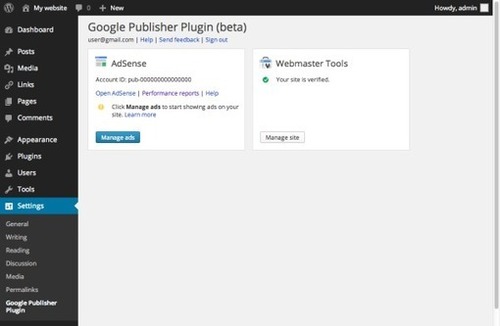 By allowing publishers to link their WordPress sites to their AdSense accounts, the plugin is designed to make getting ads up and running easier and eliminate the need for manual HTML modifications.

As you can see in the screenshot from Google below, once the plugin is installed, you just need to click on one of the plus signs to add an ad unit to the page.

After clicking on a placement, you can change the ad settings and preview what an example ad will look like alongside the content.

The Webmaster Tools support just allows you to verify your site “with just one click” if you haven’t already done so.
Note that the plugin cannot be used on sites hosted on WordPress.com at this point.

So far, the plugin has been downloaded just under 3,000 times in the past week and received 4.3 out of 5 star rating. You can download it here: